In 1774, a young actress was working in provincial Repertory in the Midlands when a performance as Rosalind in Shakespeare’s “As  You Like It” earned her an engagement with David Garrick at Drury Lane the following year.  But it did not turn out successfully, and she was not retained due to Garrick considering her voice to be too weak, a decision she later referred to as being “..banished from Drury Lane as a worthless candidate for fame and fortune.” 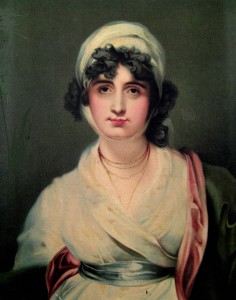 She returned to Repertory, but two years later with two small children to look after, she was no longer inclined to take a position on tour.  So when the offer came in 1778 of a residency in what was then the most prestigious theatre outside of London, the Theatre Royal in Bath, Sarah Siddons accepted it gratefully.  The impression she made was immediate, as related by Bath resident John Taylor to his friend in London, one David Garrick:

I will venture to add a paragraph relative to our stage matters, if only to do justice to an excellent actress which has appeared here this season (a Mrs Siddons) who I really think is as much mistress of her business as any female I ever saw, and I declare my opinion of her to be all that my ideas can reach.  Her Portia, Belvedira and other pathetic parts in tragedy are, I think, exquisitely fine.  Palmer goes on bravely, I wish, however Sheridan would write no more, for nothing now will go down but ‘School for Scandal’ and ‘Duenna’.

But Sarah Siddons was not the only top name, the list of actors in the Bath Theatre Royal company between 1775 and 1805 reading like a roll-call of the best actors on the English stage at the time – Mr Henderson, Mr Kemble, Mr Blanchard, Mr Murray, Mr & Mrs Bernard, Mr Incledon, Miss Wallis and Mr Elliston all regularly appearing on Orchard Street playbills.