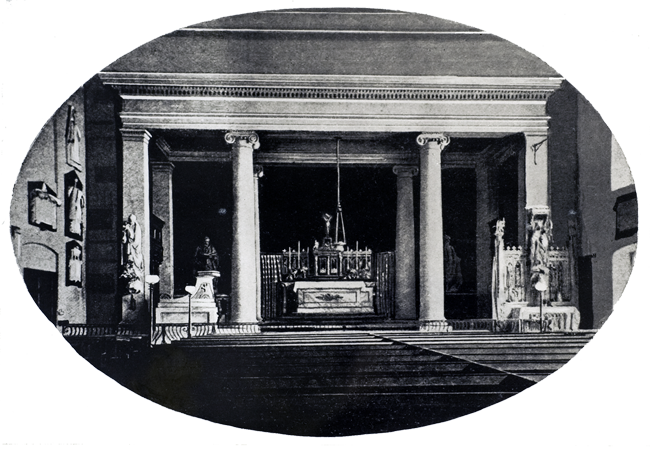 In 1809, The Benedictine Mission to Bath purchased the disused theatre building in Orchard Street to convert it into their principal place of worship in the City.  The journey to this location from their original home in Bath Abbey may only have covered just a few hundred yards in distance, but had taken 270 years to achieve.

When the Abbey was dissolved in 1539, most of the mission fled overseas.  However, a small contingent stayed-on to maintain a lodging house for recusants at the Bell Tree House near to the main Baths complex.  When the first Catholic Relief Act was passed in 1778, they built a new Chapel in St James’ Passage, but this was destroyed in the Gordon Riots of 1780, along with the neighbouring Presbytery.

The principle missioner, Dr Brewer, was chased through the streets by the mob, seeking sanctuary at the Guildhall, which was refused.  He was rescued by the landlord of the White Hart Hotel, Charles Taylor (also a local Freemason), who gave him refuge until the riot was quelled by Militia units brought-in from Wells and Devizes.   Their next Chapel, in Corn Street, was consecrated in 1786 and was their main place of worship until the move to Orchard Street was completed.

The conversion included the insertion of a level floor over the theatre’s pit area.  This created barrel vaults beneath which were used to house burials, Catholic burials not being allowed in consecrated areas of public cemeteries.  The side galleries and boxes were removed to enable pews to be fitted across the full width of the auditorium; these also extended back into the old crush bar area.  The fan-shaped boxes above were retained, which provided a total capacity of around 1000.  Windows were cut into the rear wall to allow extra light in, and the dressing rooms were converted into school rooms.  The house next door was purchased as the lodging house for the priests and schoolteachers.

In 1817, a new principal Missioner, Peter Augustine Baines, arrived from Ampleforth in Yorkshire, where he had been a pupil of a previous incumbant, Dr Brewer.   He found the establishment in a poor state, and set-about recovering the situation.  He had additional windows cut into the rear wall, and created a small private chapel by extending one of the rear rooms of the lodging house, and providing access to it from behind the main altar. This allowed the priests to move between the two buildings without having to go outside into the street.

For these projects he engaged a young local architect, Edmund Goodridge, who would go on to produce a number of notable buildings in Bath, including Beckford’s Tower and The Corridor shopping arcade.  Our private chapel remains as the earliest example of Goodridge’s work in the City.

Baines then purchased 2 Pierrepont Place, around the corner, as the Presbytery.  It was a fairly ordinary lodging house at the time, but over the next few years he had it enlarged into a splendid town house more than twice the size of the original.  The gardens at the back of the Presbytery were linked to the courtyards at the back of the chapel and lodging house, creating a secluded private area for contemplation accessible from all three buildings.

In 1829, Baines was made Bishop of Siga, Vicar Apostolic of the Western District.  He went on to purchase Prior Park mansion and create the first Catholic university in England since the dissolution.   Prior Park today is a Catholic private school, and is much larger than the original mansion built for Ralph Allen by John Wood the Elder in the 1730s.  The two large wings were added by Baines in the 1830s, much of the work being handled by Goodridge.

Baines died in 1843 at the age of just 56, and control of Orchard Street Chapel passed through several hands until the arrival of John Clement Worsley in 1850.   The Catholic church was in the process of building new churches across the country, and Worsley would oversee the transition of his congregation to a new building just 100 yards away – the church of St John the Evangelist.

He began by having a dedicated school building erected directly across Orchard Street which was opened in 1852, and is now the Manvers Hall.  It accommodated separate areas for boys and girls, as well as an area for younger children – the very first infants’ school in Bath.  In 1856 he purchased land from Prior Park estate to create Perrymead Cemetery, and had the burials moved there from beneath the building.   He then oversaw the building of the new church, the foundation stone of which was laid in 1861.  The congregation moved there after the consecration in 1863.

Once again our building fell silent, but it would not be too long before it found another owner.