The salvaged memorial stones in the Museum give an insight into the people who worshipped in the Orchard Street Chapel.  This one is for Cecile de Sommery, who was the daughter of a French nobleman and a Belgian princess. 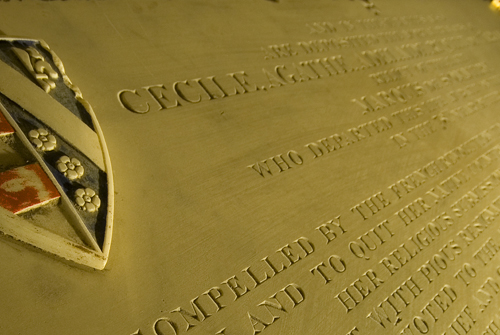 She was forced to flee Paris in 1789 with her husband and baby daughter as the revolution began its bloody round-up of the nobility and royalist supporters.  Along with other French émigrés they came to Bath, where the relaxed attitude to such visitors assured them of a safe haven.  They became part of the community that worshipped at the Corn Street Chapel, and by the time that community moved to the Orchard Street Chapel, three more children had been added to the family.

They all lived at 35 Green Park, just across the green from where Jane Austen produced her early short works.  That Cecile was on the social circuit is clear from this excerpt from the diary of another local novelist, Fanny Burney:

Alex proceded me to Madame de Sommery, who had two joilies daughters, Stephanie and Pulcherie, at work by her side, the tea table spread ‘a la anglaise’ and four of your theatres upon the table, with Alex just beginning ‘Dido’ as I entered.  Madame de Sommery is much pleased with the garden possession, and full of amity and courtesy and agremous.

From what we know, Cecile was able to conduct the rest of her life in Bath with little of the stress and drama that had occurred previously.  She continued to worship regularly at the Orchard Street Chapel until her death at the age of 77, when she was interred in the vaults below.