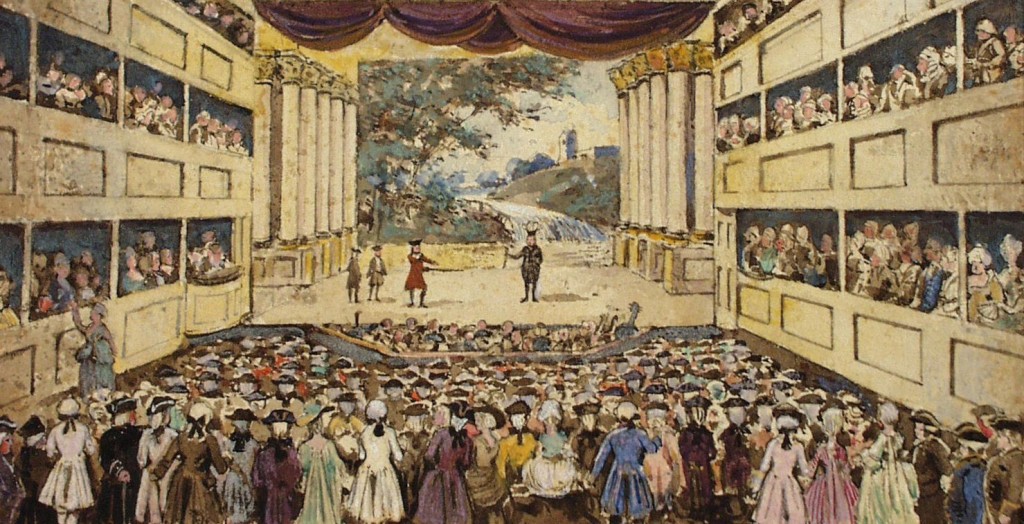 Jane Austen visited Bath several times in the late 18th Century before moving here with her family when her father retired in 1800.  She was a regular visitor to the Theatre Royal in Orchard Street during the last five years of its existence, and used the interior as a backdrop in her novel Northanger Abbey, written in 1803 (although not published until after her death in 1817).  In this scene, the heroine Catherine Morland is in the Allen family’s party in one of the boxes, when an acquaintance arrives:

The comedy so well suspended her care that no one, observing her during the first four acts, would have supposed she had any wretchedness about her. On the beginning of the fifth, however, the sudden view of Mr Henry Tilney and his father, joining a party in the opposite box, recalled her to anxiety and distress. The stage could no longer excite genuine merriment — no longer keep her whole attention. Every other look upon an average was directed towards the opposite box; and, for the space of two entire scenes, did she thus watch Henry Tilney, without being once able to catch his eye. No longer could he be suspected of indifference for a play; his notice was never withdrawn from the stage during two whole scenes. At length, however, he did look towards her, and he bowed — but such a bow! No smile, no continued observance attended it; his eyes were immediately returned to their former direction.

The side boxes at the lower level each side of the Theatre had seats (the upper two levels were standing galleries), and Austen scholars are generally of the opinion that this scene takes place in them, probably because Miss Austen’s actual situation in society would most likely place her attendance there.  However, at the time the book was written, the Theatre also had grand boxes at the upper rear, arranged in a semi-circle with the two extreme boxes also facing each other.  The social (and financial) status of the fictitious Allens and Tilneys would have made these boxes more likely of their patronage.