In 1817, a pupil of Dr Brewer arrived from the Monastery at Ampleforth in Yorkshire to take up the Principle Missioner post in Bath, which included the running of Orchard Street Chapel.   Peter Augustine Baines was an ambitious Lancastrian, who brooked no fools and had a self-driven destiny to fulfil.    An early report on the Bath Mission from him indicated that the properties it owned were in a poor state: 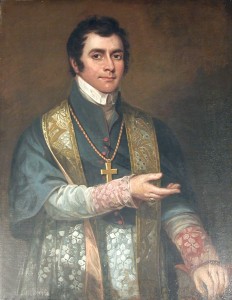 I found it necessary to incur great expenses not only in the chapel, but in all the houses and tenements belonging to it, which had been neglected, and some of which were in a state of complete dilapidation.  The house next door was let to the school committee and underlet by the tenant to a number of beggars in separate apartments for half a crown a week.  The rooms adjoining and over the chapel were tenanted in the same manner.

He quickly set about bringing all of the properties in his care into a better state of order, and would later move on to establish the first Catholic University in England since the Dissolution.  That University is now Prior Park College.